From 2003 to 2006 Ósk Vilhjálmsdóttir, together with her friend Ásta Arnardóttir, organised hikes in east Iceland. The area was then one of the last remaining wildernesses of Europe but has now been destroyed for an Alcoa aluminum smelter.

“I organized treks in the highland area where the Icelandic governmentalready had decided to build a huge hydroelectric power plant. I refused to take it as given that this part of Icelandic wilderness should be condemned for devastation.
Together with Ásta Arnardóttir I started to offer tours and to introduce this area as one of our greatest nature wonders, distributing advertising brochures etc. Nearly a thousand people signed on for these trips.”
[Ósk Vilhjálmsdóttir, founder of Wanderlust]

In September 2006, a series of huge dams has flooded an area of highland vegetation, birdlife and reindeer, also causing hazard to seal breeding grounds on the coast.

Osk and Asta organised trips in these years trips into a magnificent area, where there were plans to build the Kárahnjúkur Power Plant. Now, for the most part, the area has disappeared under Hálslón, the reservoir for the 700 MW hydroelectric power plant which supplies the aluminium factory in Fjarðabyggð with energy.

As a second part of the project series of 20 waterfalls were dammed in a glacial river that falls from one cliff after another, a total of 600 kilometers running from Vatnajokull, the greatest glacier in Europe.

The founder of WanderLust, Ósk Vilhjálmsdóttir was nominated for the Nordic Council’s Nature and Environment Prize 2009. The nomination was based on the organised trips for a large number of people to an area in the central highlands of Iceland which was threatened by plans to build a power station.

This is one of the most controversial hydroelectric power stations in Iceland. In the period 2003-2006 they guided roughly one thousand people round in this precious landscape, which was a sanctuary for reindeer and geese 600 m above sea level and where the great glacier Vatnajökull had created fertile soil.

“This government task is the biggest project in the history of Iceland. Vast areas of untouched nature – the last remaining wildernesses of Europe – was drowned September 2006. It was a sacrifice the government decided to make for the American aluminum smelter company, Alcoa. The project was carried forward by force, not enlightened discussion. Iceland is one of the smallest economies in the world. But the government is planning to make it one of the biggest aluminum producers in the world. The Icelandic government has defined the country as a heavy industry zone, a neo-colony for huge aluminum smelters. This will not only cause environmental but economical devastation as well.”
[Ósk Vilhjálmsdóttir] 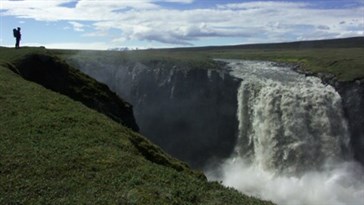 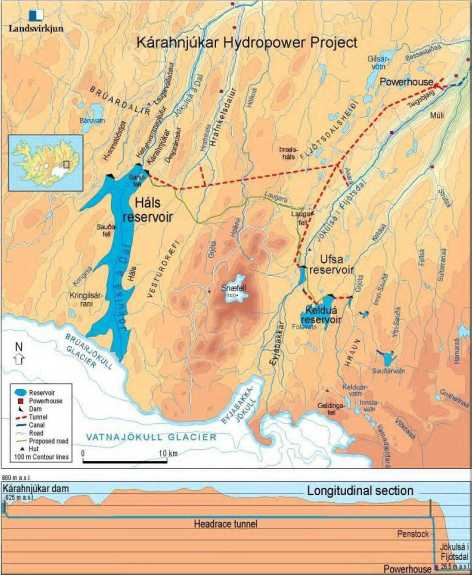